Home » Explore the Story of the Alisal » History

The land is nestled in the Santa Ynez Valley bound by a river on the northeast and a coastal mountain range on the southwest. The range barricades the coastal flow, producing warm valley days and cool valley nights. The adjacent river and seasonal streams that cross this land abound with annual runs of 10-pound steelhead trout. The rolling hills are dotted with valley oaks and coastal live oaks, many of which will live up to 300 years. The verdant glens and riverbanks, shadowed by the mountain backdrop, support healthy groves of western sycamores. Deer graze cautiously, fearing mountain lions, bears, and coyotes. Original inhabitants used this land for hunting and for gathering acorns. A newly arrived people who came from across the ocean also saw the promise of this land. The original inhabitants called this land “Nojoqui.” The new arrivals know it by the name “Alisal” (meaning “grove of sycamores”). 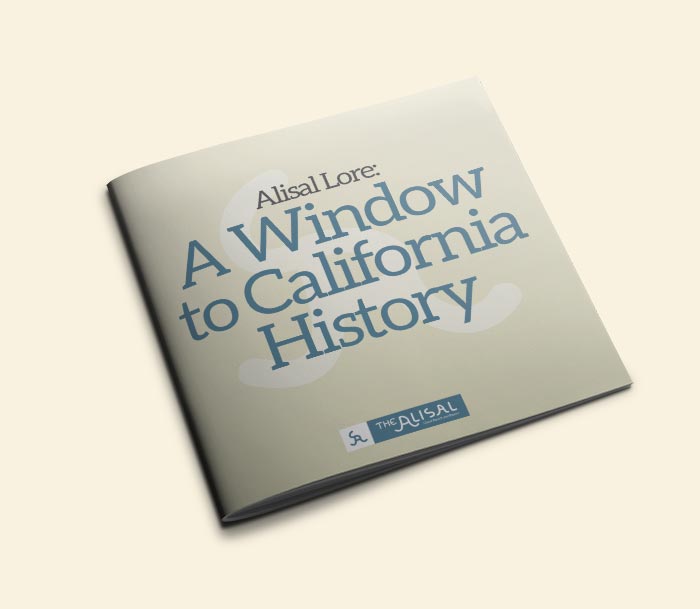 Download your personal copy of “Alisal Lore: A Window to California History”

Thirty-nine years after the Spanish padres established the Mission Santa Inés (1804) in the Chumash village of Ahajalapu, these lands across the Santa Ynez River were granted to Raimundo Carrillo. Carrillo received the 13,500-acre grant for his service to the newly established Mexican government. The sole economic focus of this land for the next 40 years (by Carrillo and five subsequent owners) would be raising livestock, primarily cattle.

Ulpiano Yndart owned the Alisal (Rancho Nojoqui) when cattle were the backbone of Santa Ynez Valley wealth (1862). He was the last of four owners who acquired their wealth during the period of Mexican authority. His sea-faring grandfather, who was a previous Alisal owner, had traveled the navigable seas of the entire globe as a captain. In the late 1860s, a terrible drought wiped out the cattle herds throughout Santa Ynez, including Ulpiano’s cattle, devastating the wealth of the entire valley. As a result of this drought, the large land grant holdings by Mexican families became available to the incoming Americans whose industriousness was now called upon to rebuild the valley’s economic base.

The Pierce family engineered a novel irrigation system, allowing them to use water from the Santa Ynez River to farm a portion of Rancho Alisal. Although cattle would never again roam unfenced in the valley, nor in their original numbers, by 1907, 49 years after the economic shock of the drought, William T. Mead had established the Alisal Ranch Company, and this ranch and its neighbors’ ranches experienced an extended period of prosperity.

Horses had been essential to the cattle economy of the Alisal for decades. Never, however, had such care been given to these animals until Charles E. Perkins purchased the Alisal in 1927 and devoted his attention to the raising of thoroughbred horse, as well as fine cattle. Perkins raised Kentucky Derby-winner Flying Ebony, the trotting horse Lou Dillon, and other well-known horses.

A century after Carrillo received the grant for Rancho Nojoqui, the Alisal was purchased by Charles Pete Jackson Jr., who expanded the reputation of the Alisal in an entirely new direction—hospitality. Originally designed solely as a working cattle ranch, manager Lynn Gilliam advised the family to convert the cattlemen’s quarters to guest rooms for dude ranch visitors. On July 16, 1946, the Alisal Guest Ranch was opened for summer seasons with a maximum capacity of 30 guests.

Since then, the Alisal has consistently ranked at the top of the country’s resorts and has been a playground for a number of notable guests. Clark Gable married Lady Silvia in the Alisal’s old library, and a prominent Hollywood magazine featured a front-page story on Doris Day while on one of her regular visits to the Alisal.

Though the Alisal today maintains a low profile, its focus on quality remains and its public reputation continues to grow. Celebrities are frequent guests, and the ranch welcomes visitors from the world over. Western-flavored hospitality remains, however: The cattlemen’s quarters that once fed grub to hungry cowboys is now a discriminating restaurant; deer can still be seen grazing cautiously, though these days it is often on the Alisal’s 18-hole golf courses; and horses and cattle roam grass-covered hills that have changed little since the days of the Spanish vaquero.

Riders of The Alisal

We love the tradition of the Alisal for our family. We’ve traveled the world, but this is our favorite family gathering location…everyone has something they love to do.

— Debbe Adamson
Welcome!
Howdy! We use cookies to deliver a reliable & personalized Alisal.com experience. By browsing Alisal.com, you agree to our Privacy PolicyOK